Ground beef is one food that you’ll want to make sure you have on hand. Always opt for grass-fed organic beef to insure the best quality. This means they won’t have been pumped full of antibiotics and hormones, and will have been fed grass instead of corn. Grass is the natural feed for cattle, so it only makes sense that that’s what we should be feeding them. As long as you have ground beef handy you’re halfway there to being ready to take on any of these recipes. 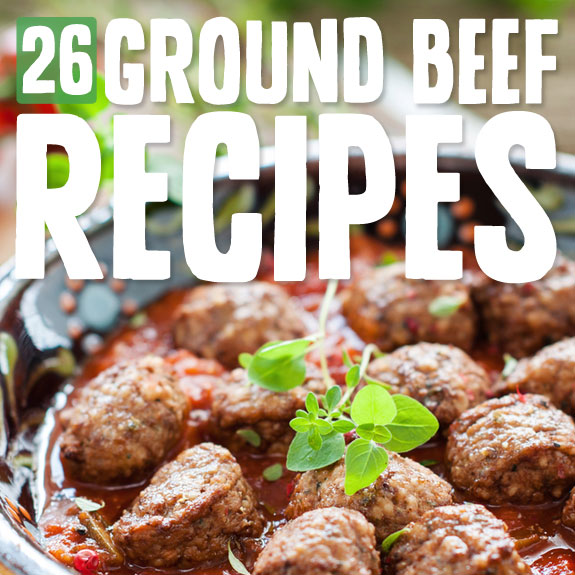 Mexican Meatball Soup (this soup is the best!)

The Best Paleo Bolognese Pizza (made with a cauliflower crust) 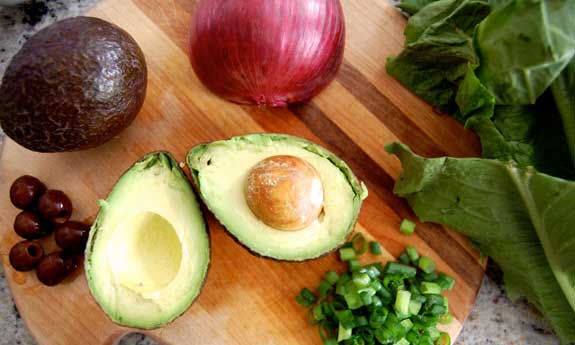 Paleo Taco Salad with Creamy Avocado Dressing
Rebecca has cooked up a wonderful taco salad for us, and has created a creamy avocado dressing to go over the entire thing. It uses plenty of ground beef, and has distinct flavors you find in Mexican cooking like black olives, chili powder, and paprika. The avocado dressing will give you the health benefits of avocado, including healthy fat and potassium, while giving it the creaminess so you don’t have to use any dairy. This can make a great lunch or dinner on the Paleo diet, and the recipe shown makes two servings so it’s good for a couple.

Salisbury Steak
Bite into this juicy Salisbury Steak recipe and you’ll love being on the Paleo diet. It’s made with plenty of ground beef, and almond flour is used instead of general purpose flour that you’ll find in the traditional recipes. The result is a moist and juicy steak that’s smothered in a creamy sauce. Use coconut milk instead of whipping cream, don’t worry they say it’s OK in the recipe, and you’ll be getting a dairy free Salisbury Steak that can roll with the best of them. Even though it’s served with some mushrooms you’ll want to eat a full portion of vegetables along with your steak.

Paleo Cajun Burgers with Caramelized Onions
These burgers are served with caramelized onions on top, and no bun so you don’t have to worry about any grain issues. She leads you to her recipe for making a Cajun seasoning mix from scratch, and we recommend making a big batch of it so you can use it for other times when you need to add a little Cajun spice to a meat. She has this resting on a bed of creamed spinach, and you’ll want to serve it with a vegetable no matter which way you go. We might recommend putting it on a bed of baby spinach for a simple way to serve it up.

Stuffed Acorn Squash
Put your acorn squash to good use with this beef-stuffed recipe. By following their directions you’ll end up with a squash that is fully cooked and has an awesome texture, while still being firm enough to hold together all of the ground beef inside. The nice part about this recipe is that it fulfills both your meat and vegetable requirement for a balanced Paleo meal, so you don’t have to cook any supplemental dishes with it. Many onlookers think Paleo is just a meat diet, but that’s far from the truth since vegetables play such a big role in it.

Thai Beef with Basil
Get a taste of Thailand with this amazing Thai beef and basil recipe. It’s using grass-fed ground beef, carrots, lime juice, chiles, and garlic to bring you a nice assortment of flavors all in one bowl. You may have noticed that it’s served over a bed of rice, but this is actually cauliflower rice, keeping it within the realm of a Paleo meal. When you use cauliflower rice you are getting your vegetables along with your meat so it’s a more balanced meal and will keep you satisfied longer.

Finger Lickin’ Chipotle Meatballs
These meatballs have been dubbed finger lickin’, and for good reason, they have chipotle flavoring, and lots of it. There are plenty of ingredients just to make the meatballs, and plenty more to make the sauce that they go in. It’s fine because even though there are a lot of ingredients they’re all Paleo friendly so you can eat this without worrying that you’re doing anything wrong. The beauty is that it’s 20 minutes to prepare this and another 20 minutes to let it cook, so it’s a relatively quick meal you can make any day of the week.

Habanero Chili
This is the chili for those that like to live life on the hot side. They have added up to two habanero peppers to it, which will provide all of the heat needed. There is also plenty of ground beef, so you won’t be short on meaty yumminess. There’s onion, carrots, and celery so you’re pretty much covered as far as your vegetables go. They’ve even put bacon in this to give it a savory flavor. If you don’t like things really hot, just go with one habanero and add more the next time you make it if you didn’t think it was hot enough.

Pizza Pie Casserole
Nothing goes over better than this pizza pie casserole for a family that is begrudgingly going along with your Paleo plan. It’s made in layers and one of those layers is ground beef. The top of the casserole gets cheese if you want, but it’s optional so Paleo purists can make this dairy free by just opting out of the cheese. It will still taste really good, and taste like a pizza. There’s a veggie crust and plenty of pepperoni so you don’t have to worry if you’ll be getting that classic pizza taste, or if you’ll be missing out on your veggie serving.

Shepherd’s Pie
Traditional shepherd’s pie is off limits for Paleo followers because it uses white potatoes as the base, and those aren’t allowed on Paleo. To get around it they are using sweet potatoes, which has a similar consistency, but of course adds a different flavor to the dish. So while it might not taste exactly like the real thing, it also won’t do your body in harm by eating it. These are the types of trade offs you’ll need to make while on Paleo, and most people feel like it’s worth it because of the way their body responds.

Thai Meatball Curry
Most Thai curries will be in the form of a bowl of soup with a mixture of meats and vegetables swimming in a spicy and creamy broth. This Thai curry variation uses meatballs and a serving of sauce to do the trick. They have the recipe broken down into two lists of ingredients. One list is for the meatballs, and the other is for the curry. You then combine the two and delight in some delicious meatballs from ground beef, and an awesome curry that combines well with the meat. Serve this with a veggie and you’re all set. 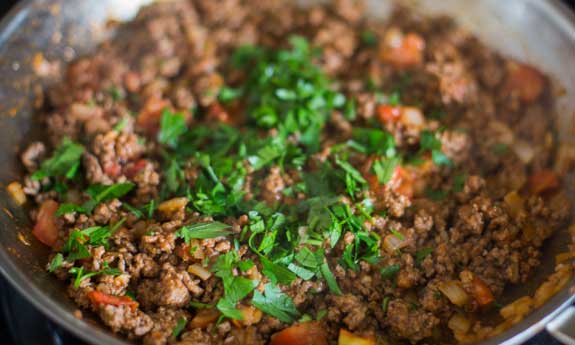 Turkish Stuffed Eggplant
These stuffed eggplants are the way to go if you want to have a meal that you don’t have to serve a side with. They’re totally fit for a meal all by themselves, as you’ll be getting plenty of vegetables and a good portion of meat with each serving. We’re not quite sure what makes this dish Turkish, as there’s only a bit of salt and pepper and parsley used for flavoring, so maybe it’s dish that is often served in Turkey. Whatever the case, Paleo is great because you can borrow from all types of cuisine, as long as it keeps you in line.

Beef Jerky
Did you ever think you’d be able to make beef jerky with ground beef? It’s possible, as long as you follow the steps in this recipe. They’re using coconut aminos, which is a bit like soy sauce but is wheat free, so you’ll find it used a lot in recipes that would normally call for soy sauce. You set your oven at its lowest setting to dry out the beef and make it into jerky you can have on the go, or any time you need a snack and want to stay on the Paleo side of things. Conventional beef jerky is not Paleo thanks to all of the things they add to it during the process.

Indian Ground Beef Coconut Curry
With so many versions of curry across the globe, it’s always good to hop around and try different ones to see which you like best. Most people are torn between Indian style and Thai style, and this Indian coconut curry is something you just have to sample. It’s made with ground beef, and some select spices that give it a classic taste while keeping it within the Paleo realm of ingredients. They have the potato listed as optional, and that’s a good thing because you’ll want to leave it out to keep it purely Paleo.

Pumpkin Sliders with Honey Drizzle
A slider is another name for a mini sized burger that just plain looks cute on your plate. These pumpkin sliders are basically burgers that have pumpkin incorporated right into them, and come in smaller sizes. They’ve concocted a nice honey drizzle for the top which is just honey that you pour on top. Instead of a bun they serve this up on a slice of raw tomato. That works to get the wheat out of it and also add some more nutrition to the entire meal. You may need more than one of these to feel full if it’s a meal, and they also make great appetizers.

Paleo Italian Meatball Hoagies
These probably won’t look like any hoagies you’ve ever eaten before, but they’re totally meant to grab the taste of a hoagie, but put it in a form that is Paleo approved. You’ll notice there isn’t a big hunk of white bread that a hoagie is known for, and instead this is served on buns made from zucchini. The recipe for the meatballs is provided, so you’ll be able to cook these up properly without worrying if you are cheating on your diet. Nothing is worse than doing really well all week on a diet plan and then cheating and eating a meal you know you’re not supposed to have. 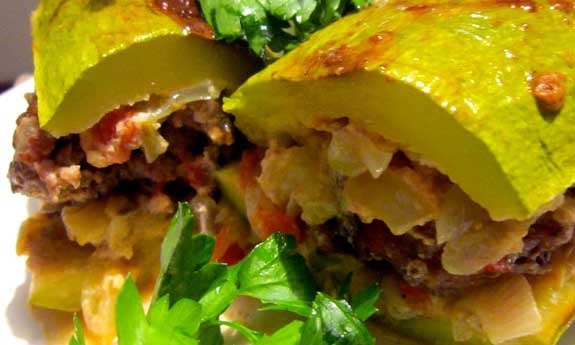 Meatball Sandwich with Zucchini “Bread”
This meatball sandwich uses i zucchinas the bread, so you don’t have to worry about wheat and grain issues and can just focus on how good the meatballs taste. There’s even a coconut sauce that is on this to make it taste even better, and Jodi has done a good job of making sure that all of the ingredients are Paleo friendly. It’s good to have a backup sandwich recipe like this one in case you ever crave a sandwich which will likely happen at some point if you used to eat them a lot before going Paleo.

FEEDmyFIT is a meal delivery service company located in Meridian, Idaho that creates nutritious meals to fuel athletes and those looking for a healthy diet. The views and opinions expressed in this article are strictly those of its authors and were not written by FEEDmyFIT. This article was originally published by Paleo Grubs.
Previous 100 Best Paleo Diet Recipes of 2018 – Easy Desserts, Snacks and Meal Ideas
Next How Many Calories Does Breathing Burn?… Asking for a Friend